The Ocean 1 hull combines lightweight composite construction and an advanced design that provides a smooth ride with unparalleled stability and comfort for passengers. Our unique design provides extraordinary lift and efficiency achieving an unmatched fuel efficiency of 1.5 mpg at 45 mph.

Ocean 1 Yachts are designed and built with a passion for perfection and performance. Through our superior attention to detail we have developed the perfect combination of style, ergonomics and practicality. The hull design is aesthetically pleasing without compromising seaworthiness and performance. The result is a platform that is truly versatile and suitable for all purposes. Ocean 1 Yacht Tenders are unmatched in engineering, design, and price. Using intelligent engineering, resin infusion with sandwich core construction our custom tenders are lighter, stronger, and more efficient than anything on the market today. The proprietary hull design was originally developed for the rigorous sport tournament fishing market thus making it ideal for virtually any open water capacity.At Ocean 1 Yacht Tenders we are dedicated to creating your ideal watercraft.

With our superior products, we are committed to ensuring unmatched customer satisfaction and service 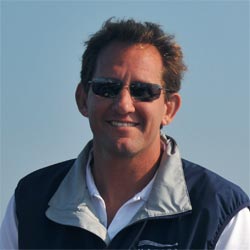 With nearly 30 years of sailing and yachting experience, Dean Maggio has spent much of his adult life at the helm of some of the most spectacular ships in the world. Growing up on a boat in Biscayne Bay certainly laid the foundation for his exciting career on the water. Since graduating from Maine Maritime Academy with an unlimited merchant marine license, his life has been an endless adventure ever since.

Professionally, the past 27 years have been spent racing world-class sailing yachts, and captaining a series of highly successful charter yachts.  For more than a decade Dean has been the captain of the 170’ schooner Meteor.  He was originally the ‘’build’’ captain for Meteor from inception in 2005, overseeing all aspects of the Dutch built vessel, until her launch in 2007.

So why venture into the world of yacht tender production?
The reason is simple; with so much time at sea, Dean realized there was a large gap in the yacht tender market. While many of the industries’ top RHIB’s possess certain good qualities, not one of them embodies “everything” a luxury yacht demands. The ‘perfect’ yacht tender should encompass speed, performance, stability, fuel efficiency and seaworthiness. So, after years of frustration, Dean decided to conceptualize his ideal yacht tender. He brainstormed with longtime friend and founder of Yellowfin Yachts, Wylie Nagler. Yellowfin is the fastest and the most highly regarded pro fishing boat company on the market today.  They realized if they combined all the attributes and luxuries Dean sought with the speedy hull of a Yellowfin, they could create the ultimate RHIB.

That concept became a reality and Yellowfin Custom Yacht Tenders was launched. With over a dozen 40’ models delivered, the line grew quickly…perhaps too quickly. Though the custom yacht tender division was a success, it hindered the production times of Yellowfin’s core business, fishing boats. When faced with extending the RHIB delivery time to over 18 months, Dean knew it was time to start on his own. The two amicably parted ways and Dean launched his new line of yacht tenders called Ocean 1.

Dean brought his designs to his new facility in north Sarasota, hand-picked a skilled crew of craftsmen and began production of “Ocean 1 Yacht Tenders”.